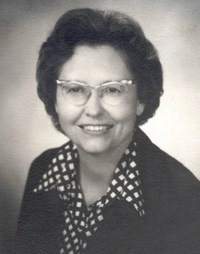 1974: The Archive began at the Fort Collins Public Library (now Poudre River Public Library District). It started with the development of the WICHE (Western Interstate Commission for Higher Education) oral history project and subsequent collecting of family materials and photographs. Charlene Tresner (right) was the first Local History Librarian and conducted many of the oral histories and collected hundreds of historic photographs that remain part of the Archive today. She was assisted in her efforts in creating an archive of local historical materials by other history-minded members of the community.

1992: Rheba Massey began her work as the Local History Librarian after McWilliams, spearheading the online Archive Access Initiative in the late 1990s.

1997-1998: The online archive, known at its inception as the Archive Access Initiative, began as a cooperative project developed by the Library, the Museum, and the Historic Midtown Neighborhood of Fort Collins, Colorado. This online archive project was funded in part by a grant from the Library Services and Construction Act administered by the Colorado State Library, and was supported by donations from the Friends of the Library, Doris and Jim Greenacre Foundation, Fort Collins Posse of the Westerners, Livermore Women's Club, the Fort Collins Historical Society, and many active volunteers. The project manager was Rheba Massey, and project consultants were Bill Thorson, Mark Grigsby, Todd Massey, Robi Sen, and Hussain Chinoy. Special image scanning software and hardware was provided by Hewlett Packard's Home Imaging Division. The original Fort Collins History and Architecture Database was designed and donated by Jeff Bridges, a resident of the Historic Midtown Neighborhood.

2007: The Archive and all of its holdings moved from the Library and re-opened at the Fort Collins Museum located at the Carnegie library building at 200 Mathews Street. Lesley Struc became Archive Curator at the Museum, and part-time research assistants were hired.

Today: The Archive at Fort Collins Museum of Discovery is free to visit and open to the public 30 hours per week. The staff continues the work begun by Charlene Tresner over four decades ago by collecting and preserving unique historical materials that tell the story of Fort Collins and making them available for current and future research.

None of the Archive's efforts would be possible without the tireless effort and countless hours contributed by volunteers, work-study students, and interns. They have organized, cataloged, and scanned historic images, indexed and performed data entry of tax assessor records, photograph ledger books, historic scrapbooks and newspapers, and vertical files, created inventories and re-housed collections, and assisted with grants, computer problems, and development of the website. In short, the Archive wouldn't exist without our volunteer corps. Thank you!