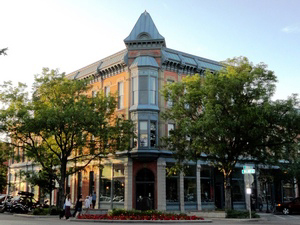 Truth: This legend is true! In 1994 Richard Francaviglia, author of the 1996 book Main Street Revisited: Time, Space, and Image Building in Small-Town America called Rheba Massey at the Archive to perform research on his book. Mr. Francaviglia had been to the Walt Disney Archives to perform research and much to his surprise he found out that Harper Goff, a former resident of Fort Collins, had used Fort Collins and Walt Disney's hometown, Marceline, Missouri as an inspiration and models for Disneyland's Main Street USA. Mr. Francaviglia decided he would visit these towns and view some of the extant buildings that were copied for Disneyland. The basic information that he used for his research in Fort Collins was an interview with Harper Goff that was published in The 'E' Ticket: Collecting Theme Park Memories, winter 1992-93. Harper stated in this interview:

"Yeah, I was born in that little town... Fort Collins, Colorado. My dad owned a newspaper there, the Fort Collins Express Courier, and I grew up there. It was a very prosperous town. We had banks that looked like banks, you know, and there was a Victorian city hall. I was born in 1911 and these buildings were around when I was a kid. When I started working on Main Street, I had photographs of Fort Collins taken. I showed them to Walt and he liked them very much. Disneyland's City Hall was copied from Fort Collins... so was the Bank building and some of the others."

When Mr. Francaviglia and his wife arrived in Fort Collins, Ms. Massey gave them a tour of the Old Town area and provided historic photographs of various downtown buildings. The following buildings were of particular interest:

He was also interested in the original streetscape in front of the Colorado & Southern Depot with its grassy median in the center of the street, and the round grassy median or roundabout that was previously in the intersection of Laporte and College Avenues. He commented that there is a similar streetscape at the entry to Disneyland's Main Street USA with its railroad station.

As a result of this information, Ms. Massey informed Joy Poole, then director of the Fort Collins Museum, and Coloradoan newspaper reporter David Persons that Fort Collins had some little-known notoriety. Ms. Poole and David Persons set up an appointment to interview Mr. Goff's wife in Palm Springs, California. This interview is published in the November 5, 1995, edition of the Coloradoan page A1. Additionally, the New York Times published an article on Mr. Francaviglia's book that included photographs of Fort Collins and the comparison to Main Street USA in its October 15, 1998 edition on page F1. These articles are all available to view in the Archive's biographical file of Harper Goff, and Francaviglia's book Main Street Revisited is available for research at the Archive at Fort Collins Museum of Discovery and for check-out at the Poudre River Public Library District.

"There are two towns that can claim a relationship with Main Street, U.S.A. at Disneyland - Marceline, Missouri, where Walt Disney spent several years of his childhood, and Fort Collins, Colorado, where Main Street designer Harper Goff grew up."

The Fort Collins Museum of Discovery has two works of art by Harper Goff in its collection: